This renovation and expansion project, which unites all student services in one building for the first time, is a story of revitalization, preservation, and communication. 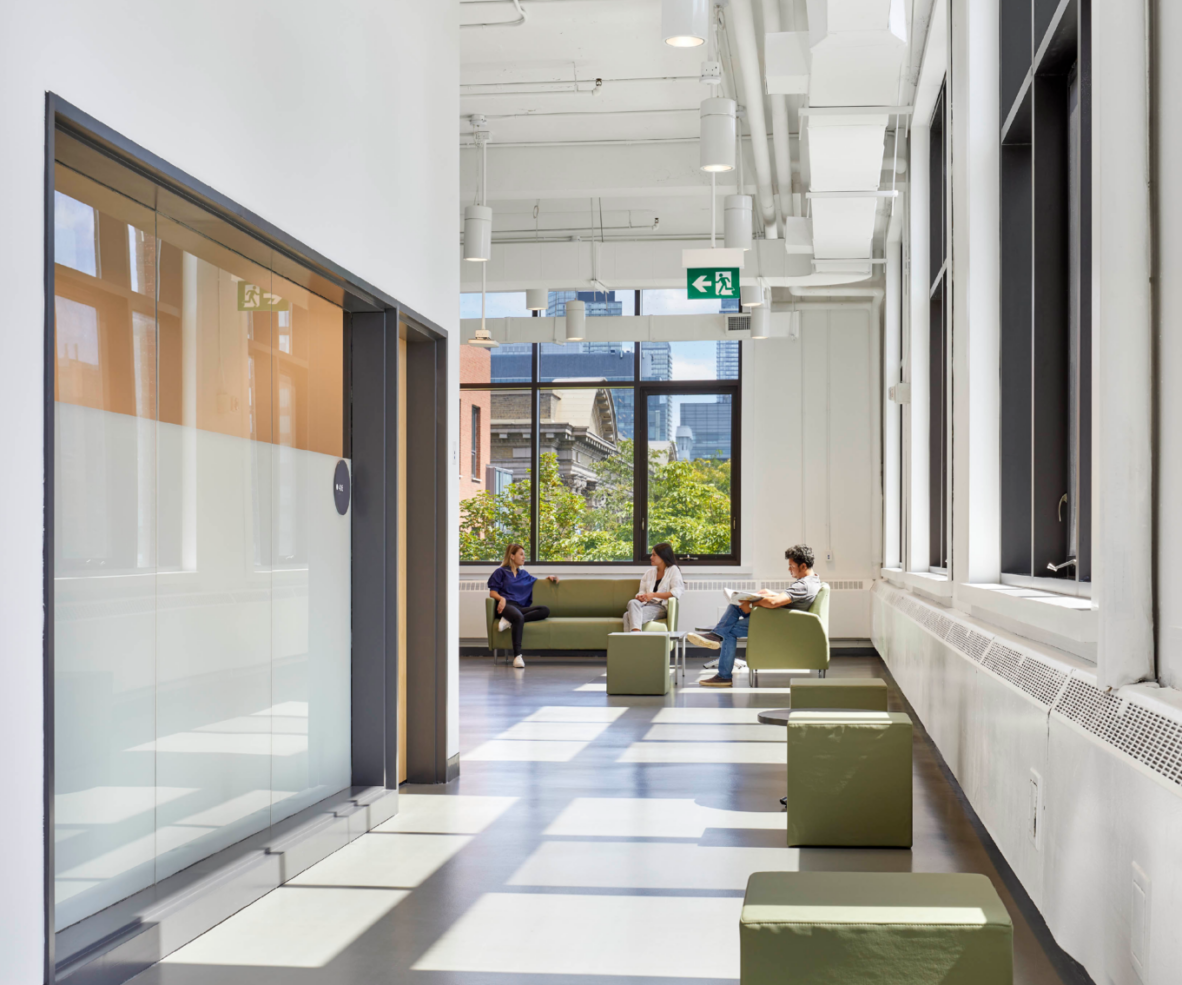 The new Student Commons entailed the strategic renovation and expansion of a 1909 building to create a dedicated space for student services on the St. George Campus. 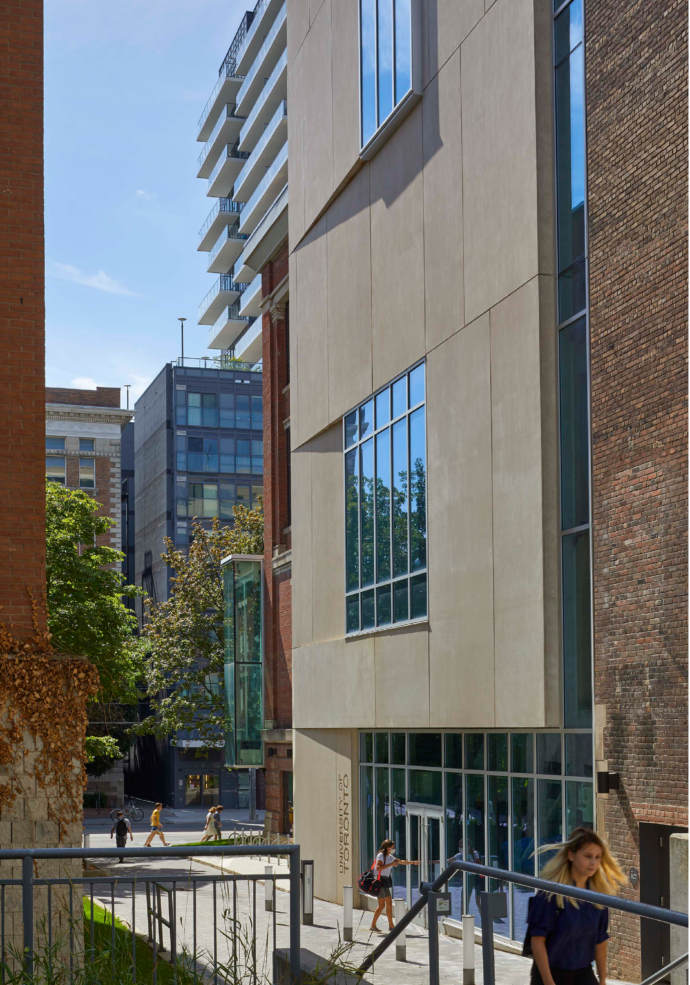 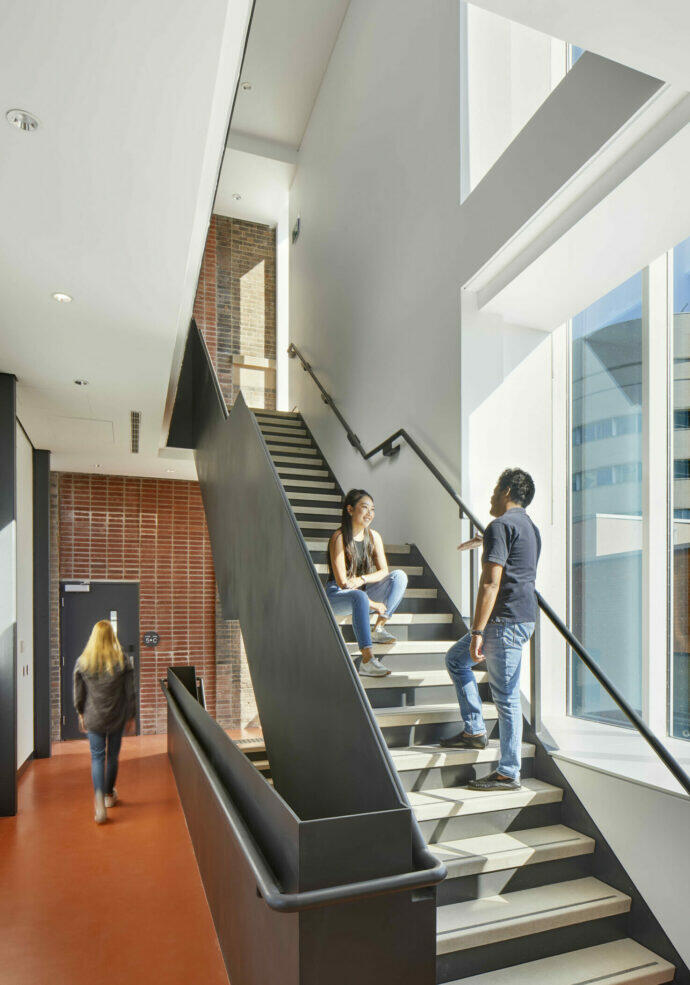 Superkül’s expansion on the building’s east side encloses a new soaring steel stairwell that spans all six floors. 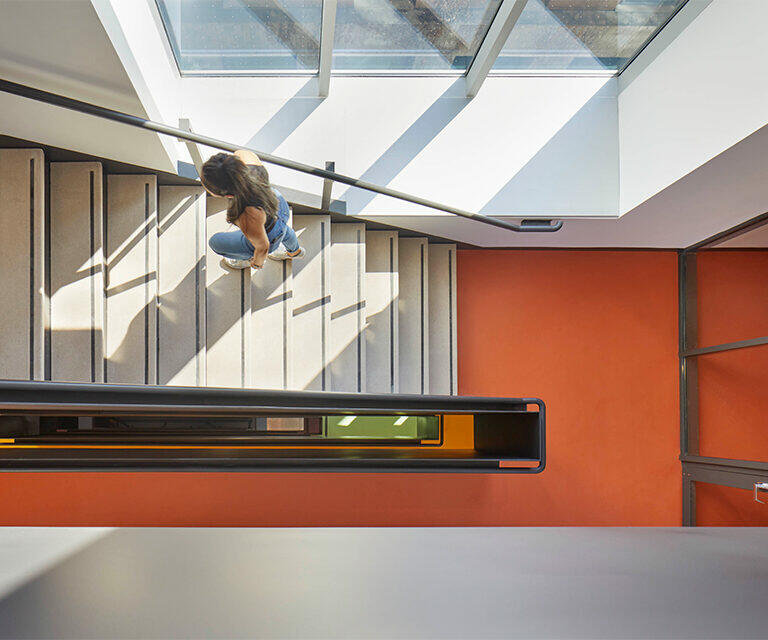 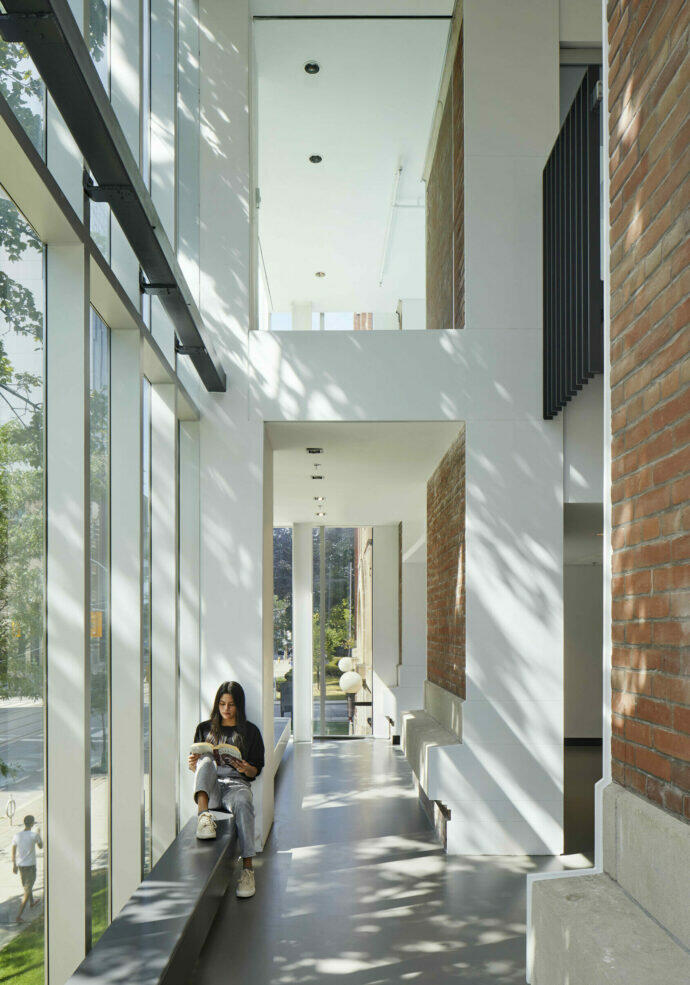 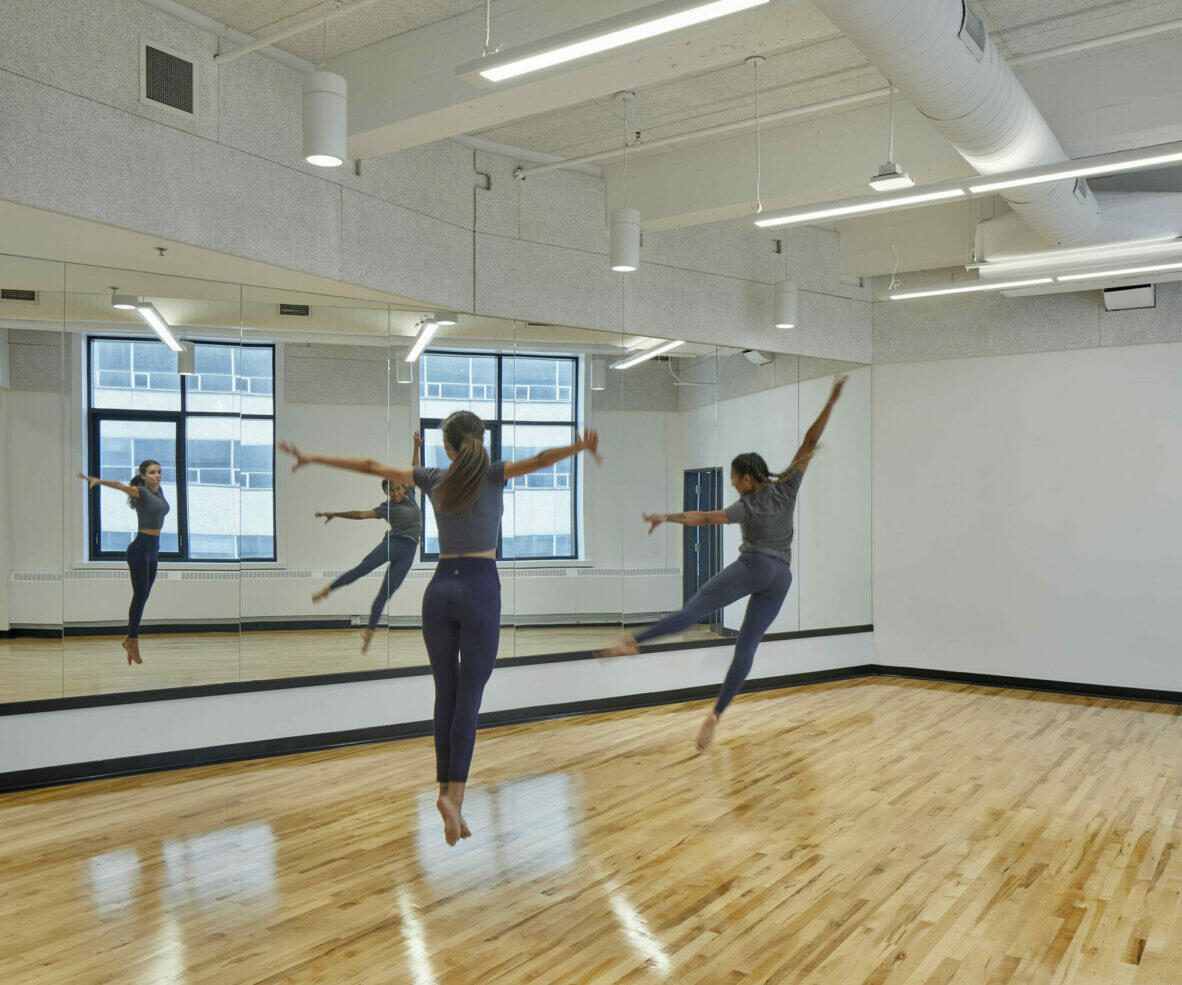 A new and dignified entrance on the west side of the building with a punched-out “porch” in which students can read, converse, or simply sit quietly and observe the bustle of downtown campus life below. 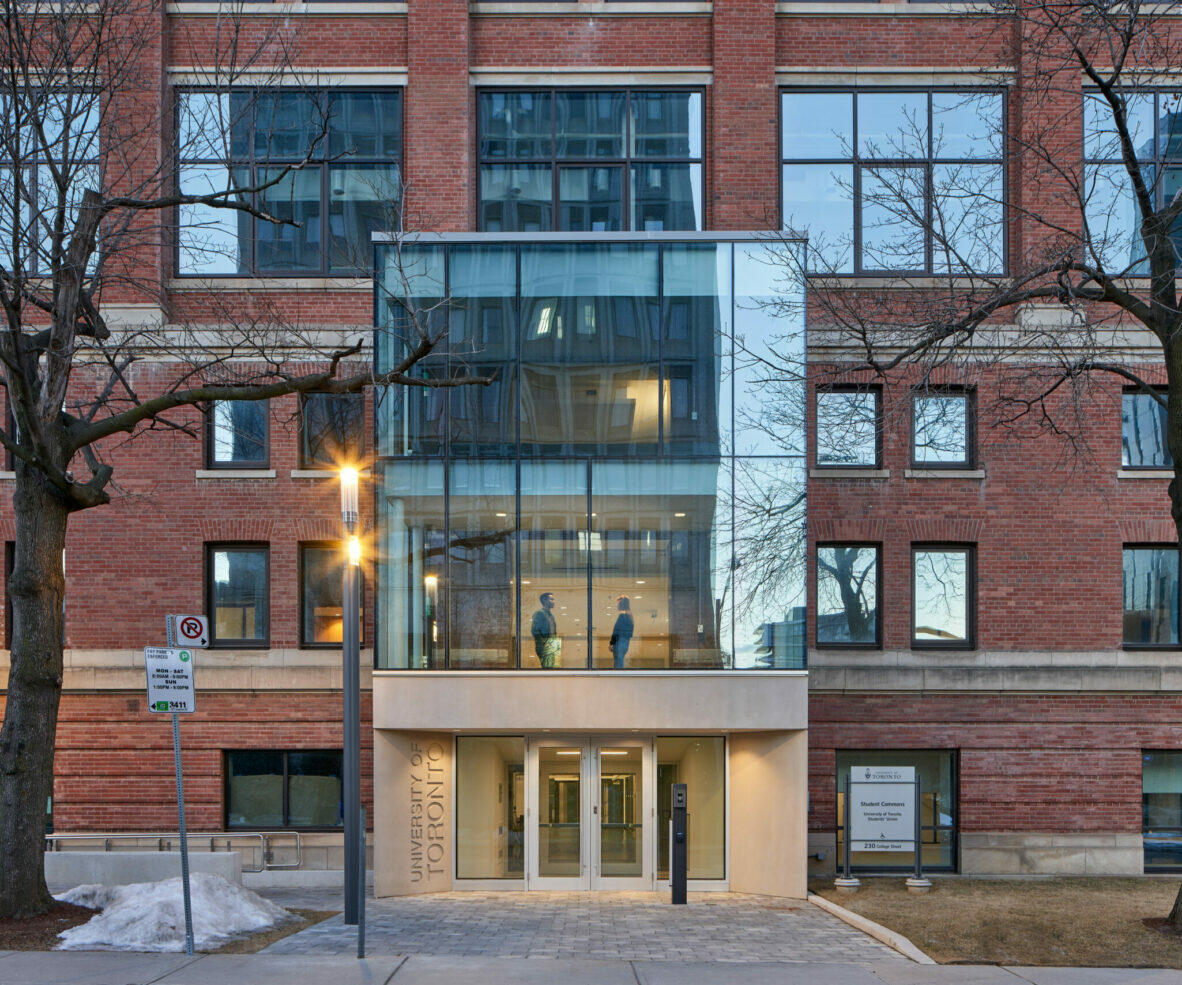 Located on a prominent corner of the University’s downtown St. George campus, this renovation and expansion project accomplishes an unprecedented task: uniting student services — the majority of which had previously been dispersed across campus — in the context of a design that forges new connections and communities in an old and complex space.

Our strategic renovation and expansion of this early-20th-century building responds to 21st-century student and institutional needs by delivering a heterogeneous program that is entirely under student governance and management. The design is the culmination of an extensive, thoroughgoing multi-year stakeholder engagement process that entailed consulting with upwards of 10 student groups and major university stakeholders to hone a program that balances student priorities with flexible leasing models to ensure a revenue-positive scheme for the building.

The result is a varied program across six floors that includes everything from club and administrative offices, meeting rooms, lecture halls, and dance studios, to a bike repair shop, dedicated multi-faith areas, large flexible spaces for study and congregation, and food and beverage.

Initially built for the Royal College of Dental Surgeons in 1909, the building was most recently occupied by the Faculty of Architecture, Landscape, and Design. Early on in the process, our team made a deliberate philosophical decision: to honour design interventions made by previous architects while peeling back and opening up the century-old building to bring in additional natural light, introduce new sightlines and circulation axes, and amplify inclusivity and connectivity.

Original stairwells by Baird Sampson Neuert Architects and Kohn Shnier, for example, were retained and refreshed, while Superkül’s expansion on the east side encloses a new soaring steel stairwell that spans all six floors. The preservation and juxtaposition of these architectural layers allows them to communicate with each other across time while also reinforcing literal connections across space.

With new entrances on both the east and west sides that multiply the building’s at-grade identity and accessibility, the Student Commons is a revitalized space that offers students a dynamic refuge for study, recreation, and repose at the heart of the University of Toronto’s downtown campus.