This 20-acre mixed-use development in Scarborough will feature three new Superkül-designed buildings of varying heights that forge material and formal relationships while responding thoughtfully to both site and context. 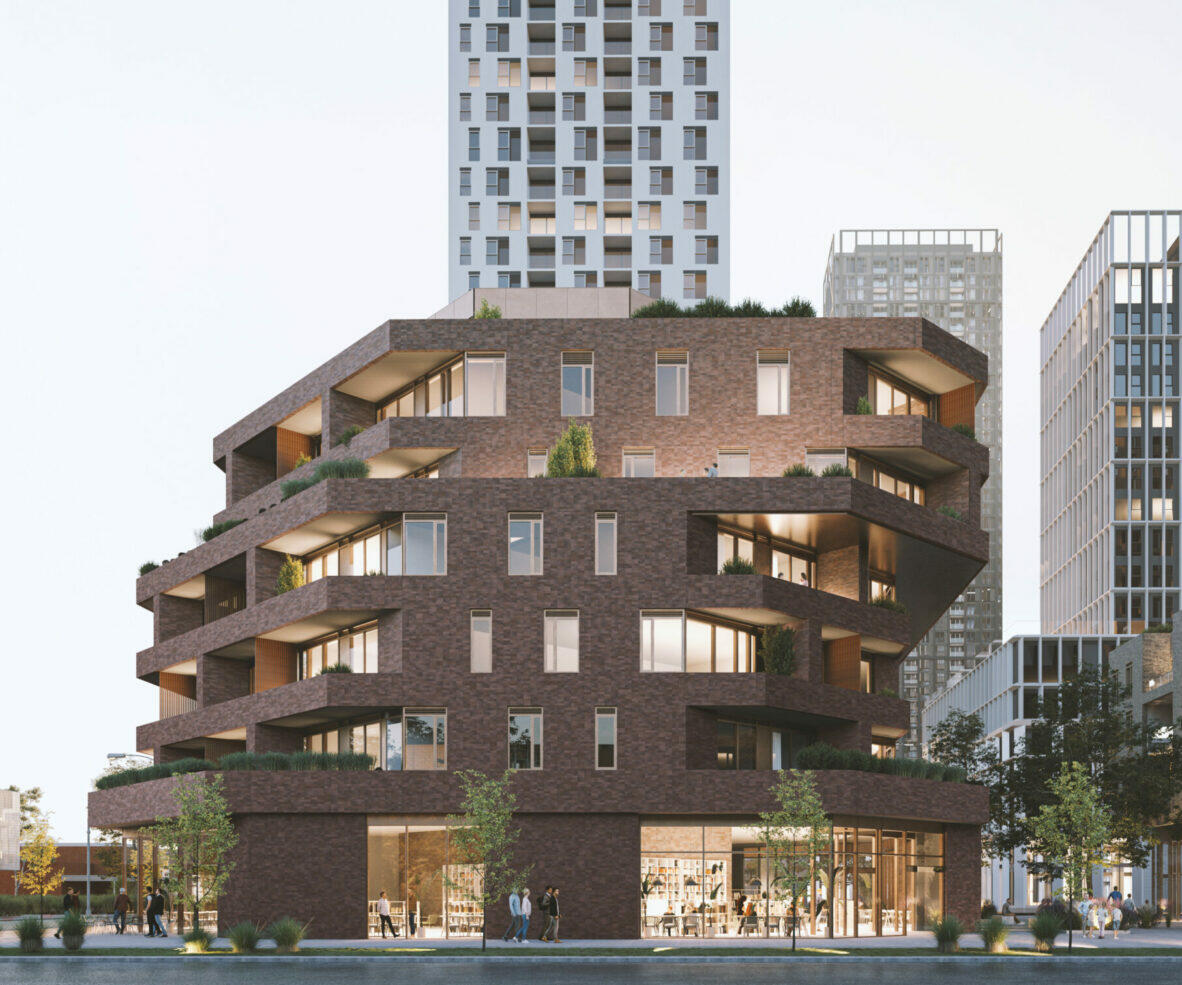 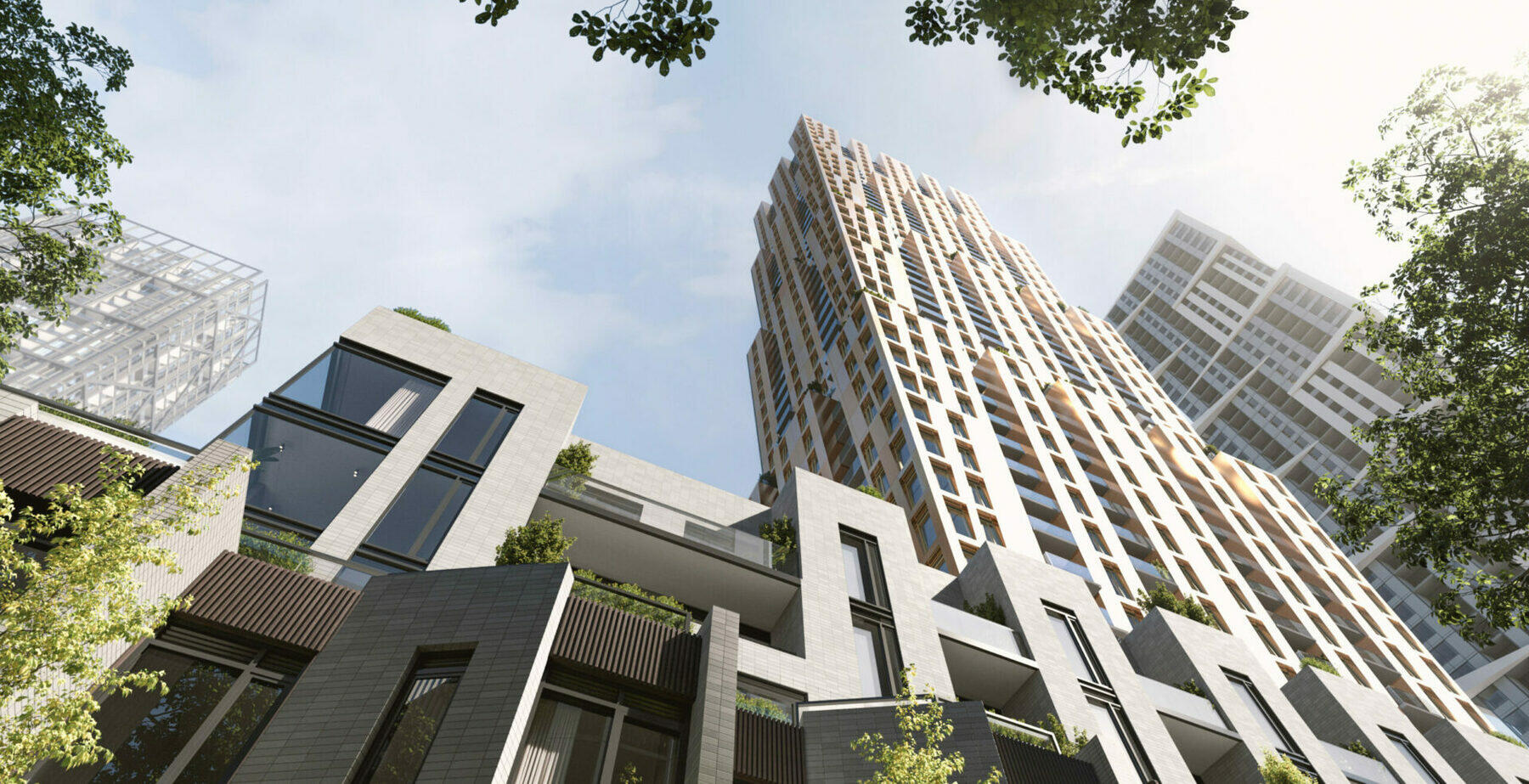 Golden Mile is a 20-acre mixed-use development in the Toronto suburb of Scarborough that seeks to intensify former industrial-commercial lands that sit along the new LRT line. Commissioned by Madison Group, Superkül is designing three new buildings of varying heights that forge formal and material relationships with one another and take cues from the surrounding context.

Our contribution to the master plan includes multi-unit residential design at three different scales: two adjacent mid-rises at the northwest corner of the development site that are six (A1) and 18 storeys (A2), respectively, as well as a 48-storey high-rise (B5) that sits within the southeast quadrant at the intersection of the two internal streets. All three buildings are designed to be experienced in the round, with an activated public realm flanking each structure on all sides and connecting to future parks and pedestrian routes.

Sitting opposite to Centennial College’s Ashtonbee Campus Library & Student Hub to the north, A1 and A2 occupy adjacent lots and face the large proposed park to the south. Conceived as variations on a theme, A1 and A2 deploy a series of stacked, offset volumes that break down the height of the buildings, introduce large outdoor spaces that face various exposures, and respond to specific site conditions on each block. The materiality of A1 and A2 share a similar palette of natural, earthy tones: A1 consists of red brick whereas A2 features two tones — beige and light brown — on the podium, complemented by a champagne-coloured metal cladding above.

The octagonal footprint of A1 takes its cues from the chamfered site boundary at the intersection of Hakimi Avenue and Ashtonbee Road. Its rotational “torque” allows the building to be experienced from all sides while the stacked volumes respect the datum of the Centennial College gateway. At grade, there is a residential lobby at the northeast corner, with retail spaces wrapping around the remaining sides to activate the public realm. On the upper floors, large continuous balconies, with integrated planter boxes carved out of alternating sides of the building, provide ample outdoor space for residents while simultaneously activating the structure at various elevations. A generous west-facing amenity terrace on the rooftop level capitalizes on afternoon daylight and unobstructed views north to the planned Meadoway park.

A2’s massing consists of stacked boxes with a series of setbacks on the lower floors and alternating one-directional cantilevers on the upper floors. The shifting forms push and pull in the same direction as A1, creating a shared spatial vocabulary between the two buildings and a dynamic public realm at grade. The podium steps back on all sides at levels five and six to transition between base and tower and relate to the proposed tower to the east. A large south-facing outdoor amenity space on the seventh floor overlooks the new public park to the south. At grade, the building offers retail and easy access on both sides, with a row of townhouses enlivening the street on the south end of the lot. A commercial elevator lobby within the ground floor provides access to below-grade parking for both buildings.

Our high-rise design for B5 will sit at the opposite end of the site, adjacent to a small internal park to the north and an office building and school to the west. Rising up from a four-storey podium, clad in a light grey brick with dark bronze mullions, the tower consists of four stacked, tapering volumes (each at 11 storeys) that flare out on the upper floors to provide large occupiable terraces. The flaring only occurs on the west and north elevations, forging a distinct “two-sided” crenulated appearance on the street-facing sides of the building; the façades that face the internal streets and adjacent towers are flat. (We repeated the crenulated façades on the lower floors to finesse the scale of the elevation and animate the street wall.) This duality is emphasized further by a subtle shift in tone: whereas the metal panels on the flared sides feature a champagne finish, those on the flat sides are finished in silver.